The Facts On… Polythene Bags

Polythene bags need no introduction; they seem to be everywhere. While they are frequently demonised for polluting our oceans and landscapes, they still play an important part in the packaging industry, so let’s hear it for polythene bags before they’re consigned to the recycling bin of history.

Before we go on to the main reason for this article we’d like to point out that great advances are being made in the field of biopolymers – plastics made from natural, sustainable, non-petrochemical sources that readily biodegrade after use.

Biocompostable plastics are even better – added to the humble compost heap, they quickly break down into minute particles and by the time the compost is being dug into the soil, all that’s left of them is water, carbon dioxide and a few harmless minerals. Rapid advances are being made in this field and we are optimistic that this blog will soon be superseded by one that will extol the eco-virtues of plastic.

So, onto the main subject… 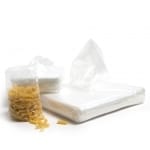 The Basic Bag
In its most basic form, a polythene bag is what packaging experts call an open ended bag. It’s just a bag – a sort of tube of clear plastic with one end open and the other one sealed together in a straight line so that when you put stuff in the tube it doesn’t just keep going. No surprises there.

Now some people want to put bulkier stuff in their polythene bags. Not bigger (they’d use a bigger bag for that of course) but bulkier. And if that’s what they want, that’s what we give them – a gusseted polythene bag. 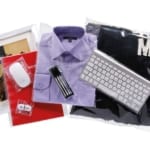 The Gusseted Bag
These are made in almost the same way as open ended bags, but when the tubing is fed through the bag-making machine the opposite edges are folded in a bit and when the machine seals the bag bottom it seals these creases too. 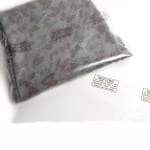 The Child Warning Bag
If you buy something that’s meant to be used in the home, it may come in what we call a Child Warning Notice bag. This will be printed with a notice warning you of the terrible consequences of leaving the bag lying around where your little cherubs might be able to reach it. And as a further safety measure (as most little cherubs are too young to read) the bags will have holes punched in them so that if they do put it over their heads they will still be able to breathe. However, if you want to put liquid or powdered goods in child-safe packaging, you may need to look for another option. 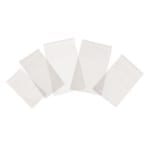 The Sealable Bag
Open ended and gusseted bags can be heat sealed for the ultimate protection against good stuff getting out and bad stuff getting in. Or it can be folded and taped. Or you can use a bag neck sealer to tape the neck together like a bread bag.

But if you want something a bit different you could go for a grip seal bag, slider grip seal bag, drawstring bag, self-seal bag or peel and seal bag. 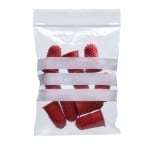 The Grip Seal Bag
A grip seal bag (also called a zip lock or grip lock bag) is a small triumph of engineering. It’s a bit like an open ended bag but the bottom of the bag is folded and the sides are heat sealed. Look closer, and you’ll find out why – the two inner edges of the bag neck are extruded with two narrow ridges on one side and one ridge on the other. If you line up these ridges and press them together, the single narrow ridge will snuggle down between to two opposite ridges and stay there until told otherwise.

The beauty of grip seal bags is that you can open and close them as many times as you like and the neck with keep on sealing time after time. They use no adhesive so the seal won’t lose its effectiveness if the bag is wet, cold, oily or dirty.

Another point to be aware of is that grip seal bags can be either plain or write-on. Write-on grip seal bags are printed with a semi-opaque panel on one side which will take permanent marker ink, so you can easily identify the contents – particularly useful for frozen food as it all tends to look the same with a coating of frost. 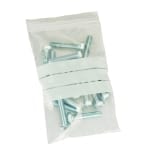 The Slider Grip Seal Bag
This uses a similar technology but has a little plastic gadget attached to the ridges on both edges of the bag. When you slide this gadget (it’s called a slider, by the way) across the bag neck it automatically seals the bag. Slide it back and it will unseal it. 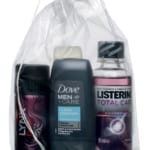 The Drawstring Bag
This looks like a carryover from the purses commonly used in Ye Medieval Englande to carry around your hard-earned groats and florins. A thin cotton thread runs through a channel around the open edge of the bag and when the string is pulled the bag neck crimps together – another endlessly reusable seal although probably more suitable for presentation packaging than frozen food or nuts and bolts. 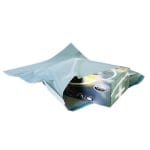 The Self-Seal Bag
Like a bad haircut, one side of this bag’s neck is longer than the other and the inner face of this extended side has a strip of adhesive on it. There’s a similar strip of the same adhesive on the outer face of the opposite side, and this adhesive is special – except the part of the bag it’s stuck to, it will only really properly stick to itself.

This means you can put your stuff into the bag then fold the longer side over onto the shorter side and stick it down. The adhesive is also designed so that you can open and reseal the bag time and again – they’re often used to pack shirts and the like. 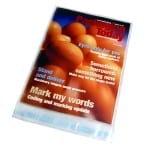 The Peel & Seal Bag
This one’s similar to a self-seal bag, only instead of the two strips of adhesive it only has one – on the longer side – and as this is a stronger adhesive it’s protected by a strip of release paper. The release paper stays in place until the bag has been packed, then it’s removed and the flap is stuck down. What you then do with the release paper is your matter, but we’re still working on useful ways to extend their service life.

The Mailing Bag
A variation of the peel and seal bag, generally made of a co-extruded film which gives the envelope a grey or white outer layer and a dense black inner layer which stops the contents from being visible. Both sides of the bag neck fold over together before the bag is sealed, to give better protection from the weather.

The Layflat Tubing Bag
Earlier in this blog we mentioned that polythene bags can be heat sealed. Heat sealing is also useful if you want to make custom-sized bags from polythene layflat tubing. This is a continuous length of LDPE film tube wound onto a cardboard core. When it has been cut to the required length, first one end is sealed and the contents are loaded into the tube, and then the other end is sealed – particularly useful for long, narrow products such as curtain poles. 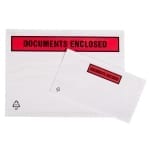 The Packing List Envelope
There’s one other type of polythene bag that we’d like to tell you about and that’s the packing list envelope. They’re also known by other names, particularly when discovered sticking to a windscreen, but we’ll come to that shortly.

Packing list envelopes are clear polythene wallets with a self-adhesive slit reverse and silicone release liner, enabling documents to be inserted prior to removal of the release liner. The envelope is applied to a consignment to create a resilient, protective pocket for the documents during transit. They can be plain, or printed with a message such as ‘Documents Enclosed’ which is why they are frequently referred to as Documents Enclosed Wallets or even just Doc Wallets. You’ve probably seen several variations of these with slightly different messages and in fact we wouldn’t be surprised if there are some people out there who collect them a bit like stamps and matchbooks. 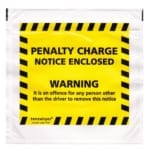 Packing list envelopes also serve a totally different, more sinister purpose. Known in professional circles as Parking Charge Notice Wallets, they commonly sport lurid black and yellow graphics and are to be found on the windscreens of inappropriately-parked vehicles. We understand they are also known by a wide variety of other names. We hope you don’t see many of them and we certainly don’t recommend collecting them.